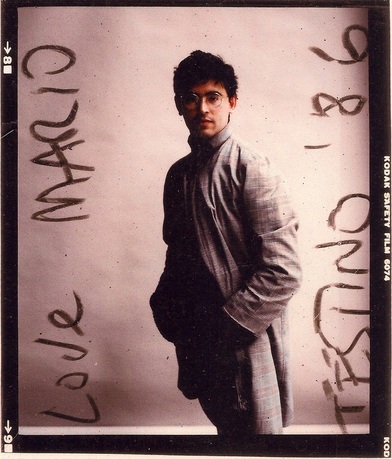 From the Museo Nazionale degli Uffizi in Florence, Italy to the Eyebeam Atelier, the Manhattan hot-cool spot, Antonio Lai da Teulada has been on a several continents and in many places both as a music and theater producer and as a multi-media artist. Antonio is definitively a multi-talented person who has worked with many music organizations:  groups like Fluxus, and dance groups like Dada and Butoh Ballet. Antonio participated as an invited producer in avant-garde theatrical festivals, like those at Asolo , Italy and in the Calderón de la Barca Theater in Valladolid, Spain.
With a strong background in medicine, having studied for three years in the School of Medicine in Sardinia, Antonio has returned to his artistic roots now to work in a project called B CELL CITY, a theater piece based on B Cell Lymphoma. The ambitious project is a collaborative effort including scientists from Columbia University, medical researchers from the Memorial Sloane Kettering Cancer Center in Manhattan and as well as artists including architects, poets, videographers, opera singers and animation artists.
In the USA, Antonio has performed in the underground circuit as a performing artist, but has also directed in open spaces and gardens, producing, among others,  Fragments of Ancient Greek Theater performed in the Tino and Ruth Nivola Garden, in East Hampton, New York. This text by Charles Matz, adapted in modern English the ancient Greek tragedy Agamemnon of Aeschylus, employing as chorus post-modern Butoh-trained dancers.

Antonio believes in the creation of musical, social, cultural events based in the community where he lives.  While living in the Hamptons, besides organizing the Hampton European community and calling it the Italia/Europa/Stati Uniti Group as a part of the famous Fourth of July parade in Southampton, New York, Antonio produced other events, including a concert in Sag Harbor, New York, of art songs and a reading in French to celebrate Bastille Day, and a special Liederabend concert of German and Italian art songs Woelffer Estate at Sagaponack, NewYork.
Right now Antonio is bringing to New York (in collaboration with Luis Herrera-Tlatoa, Mexican, and Grammy-award winner and with Ms Darynn Zimmer, a renowned opera singer) one of his earlier theatrical works that employed dance. This is work is called Antonin Artaud in Mexico of 1936, and was performed in Padua, Italy, as in a work-in-progress at the Biennale Teatro e Psichiatria: Festival Internazionale del Teatro Attivo del Disagio Psichico.
Antonio is also proud to have been invited to Poland, where his The City of the Sun, with music by the English composer David Ryder, opened the IV Annual International Theater Festival in Bialystok.
Antonio was one of the first artists to have created video-computer art, some of which was exhibited at Valladolid, Spain, during the International Theater Festival at Teatro Calderón de la Barca in 1992.
Antonio participated as a video-actor in the film Energies produced and directed by Clare Ann Matz.  The project was conceived as a celebration, using various art forms, of aspects of a hydro-electric power producing plant located at Ponte delle Alpi, Italy. The power plant located a half-mile beneath the Dolomite Alps required special permission w from the Italian Government’s National Electricity Board for access to the site use for use  in making the film.  The completed film received first prize at Ferrara Film Festival delle Acque. In its video form, the film was shown in the Beaubourg Museum in Paris, France, and in Tokyo, Japan.
Antonio has enjoyed success with his ambient and mechanical music, presented under his direction for Speed Poetry at Jazz Club Le Scimmie in Milan, Italy, one of the most important jazz clubs in Europe.
In 1984 Antonio came to the USA, and until 1989 he was an editor-at- large and reporter/photographer for Per-Lui Vogue, a Conde Nast Magazine published in Milan, Italy, under the direction of Franca Sozzani. For the magazine, Antonio interviewed Andy Warhol, Jeff Koons, Jay McInerney, Fred Wilson, and other celebrity figures.
Antonio worked with photographers Mario Testino, Luca Babini and Stefano Pandini.
From 1984 to 1986, Antonio was a contributing writer for Flash Art, New York Talk, and Boy Music published by Rizzoli, in Milan, Italy. From 1989 to 1992, Antonio was an American editor for Digraphe, published by Mercure de France in Paris, France.